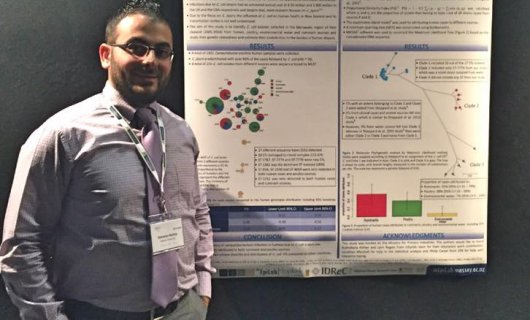 Campylobacteriosis is one of the most common foodborne diseases worldwide and a significant health burden in New Zealand. Campylobacter jejuni is the predominant Campylobacter species worldwide, accounting for approximately 90% of human cases, followed by Campylobacter coli. Since most studies in New Zealand have focused on C. jejuni, the impact of C. coli strains on human health is not well understood. In a new paper published in Applied and Environmental Microbiology (doi:10.1128/AEM.00934-16), we analysed C. coli genotypes collected in the Manawatu region of New Zealand from clinical cases, fresh poultry meat, ruminant feces and environmental water sources, between 2005 and 2014, to study their population structure and estimate the contribution of each source to the burden of human disease.

Our findings show that New Zealand C. coli strains are genetically similar to those found in the United Kingdom. Further analysis identified ruminants and poultry as the main infection sources for human cases in New Zealand, as well as a smaller contribution from surface water sources. We also showed that in contrast to C. jejuni, ruminant sources might have a greater relative contribution to infection burden than poultry in C. coli. These results highlight the need to consider each Campylobacter species separately when designing public health interventions.