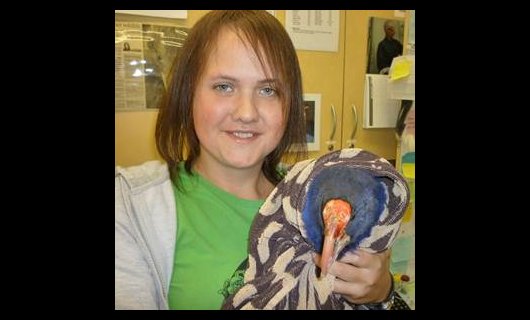 Social network analysis is being increasingly used in epidemiology and disease modelling in humans, domestic animals, and wildlife. We investigated this tool in describing a translocation network (area that allows movement of animals between geographically isolated locations) used for the conservation of an endangered flightless rail endemic to New Zealand, the Takahē (Porphyrio hochstetteri).

The takahē was believed to be extinct until it was rediscovered in the Murchison Mountains, Fiordland in 1948. Subsequently, individuals were moved into offshore predator free reserves to ensure their survival. With a current population of approximately 230 individuals, active conservation management involving multiple translocations per year is required to reduce the detrimental effects of inbreeding. The extent of isolation and human mediated mixing of individuals may influence the dynamics of pathogen prevalence and transmission in the population as a whole. As such analysis of the population in terms of subpopulations and their connectivity to each other can provide insight into the epidemiology of pathogen transmission and identify locations for disease surveillance.

Five years of takahē translocation records within New Zealand were collated and social network principles were applied to describe the connectivity of the translocation network (Figure 1). Common network descriptors and measures of centrality highlighted key locations for targeting disease surveillance. Identification of sink (wild population) and source (offshore island) locations were important in understanding potential pathogen evolution and disease threats. Additionally, the breeding centre acts as a hub of the network, an intermediary between many takahē subpopulations, thus important in pathogen transmission.

The analysis has found that the takahē network is highly variable in terms of subpopulation connectivity, which has implications on understanding the epidemiology of past, present and future disease threats. The visual representation of movements of animals in a population that this technique provides can aid decision makers when they evaluate translocation proposals, conduct pathogen surveillance or attempt to control a disease outbreak.

This work has been published in Conservation Biology and is available online.